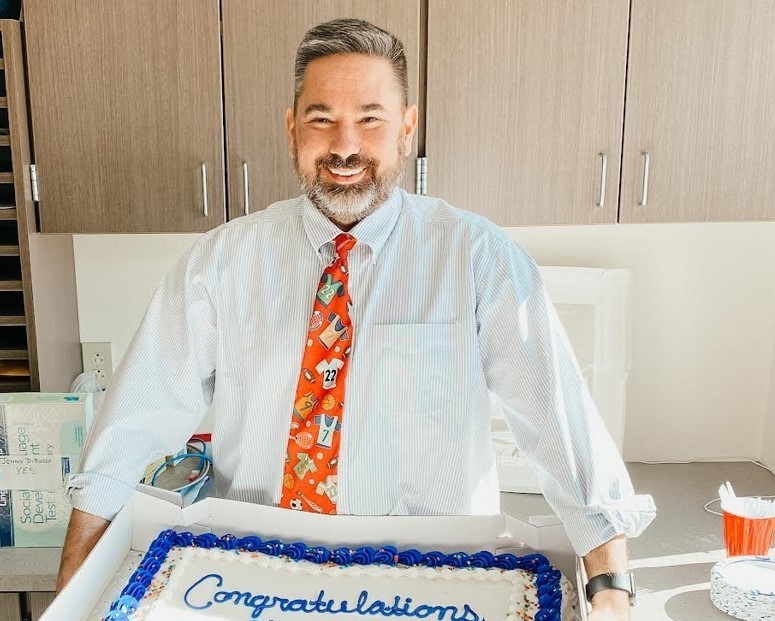 On March 21, Yarmouth Elementary School students and staff gathered in their new gymnasium to hear an exciting announcement, and we are thrilled to share that Mr. Ryan Gleason, Principal at YES, has been named Maine’s 2023 National Distinguished Principal. This award is presented by the Maine Principals’ Association (MPA) on behalf of the National Association of Elementary School Principals (NAESP). Dr. Holly Blair, Executive Director of the MPA was on hand to inform the school of this award and to invite Mr. Gleason to be recognized at a statewide banquet in April and again at a national banquet in Washington, D.C. in the fall.

Following the selection process, the MPA press release stated, “Mr. Gleason was chosen because he exudes all the qualities of an exemplary administrator.  His efforts to empower students and develop relationships with stakeholders are impressive.  His leadership clearly meets the defined mission of Yarmouth Elementary School.”

Dr. Blair noted, “Principal Gleason has been chosen for his contributions to the well-being of the entire educational community, creating a positive environment and having the ability to motivate and inspire others.  The interpersonal relationships he has created and his ability to overcome extreme obstacles demonstrates the impeccable leadership that he provides for his students, staff, and community.”

Mr. Gleason began his educational career as Director of Admissions and a classroom teacher at St. Dominic Regional High School.  He then moved into the Assistant Principal role at Durham Community School in 2007 where he stayed until 2014 when he became the Assistant Principal at Falmouth Elementary School.  In 2017, Mr. Gleason became the proud principal of Yarmouth Elementary School where he has been ever since – and where we hope to keep him for many years to come.

Superintendent of Schools Andrew Dolloff was excited to share the news of Mr. Gleason's selection. Dr. Dolloff stated, "While these past 24 months have been challenging in many ways, renovating and constructing additions to the school while it is occupied by hundreds of students and faculty each day have made Mr. Gleason’s job particularly complex. However, he has handled these challenges with grace, patience and a clear focus on what is best for students. His enthusiasm for learning and his passion for helping others are internal strengths that motivate him to work tirelessly for the community."

Please join us in thanking Mr. Gleason for his dedication to our students as we congratulate him for being named Maine’s 2023 National Distinguished Principal.