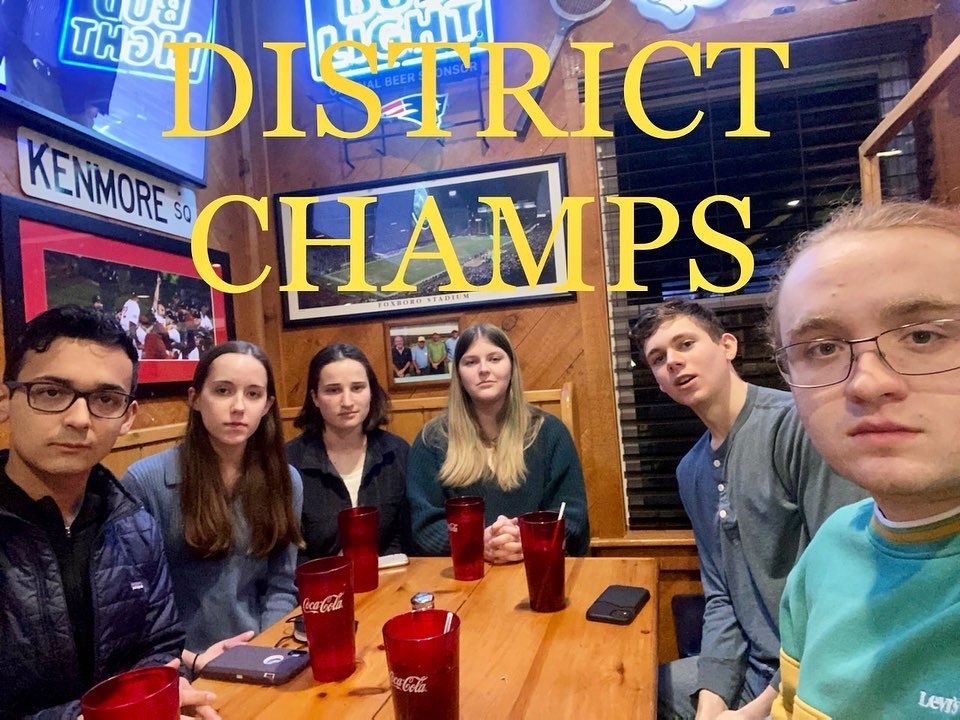 For the 2nd year in a row, the YHS Speech and Debate Team are the 2022 Congressional Champions for the Maine District. The four students who wound up attending persevered through nearly twelve hours of competition and absolutely earned this honor.

Unfortunately,, Joshua Leinwand and Hope Cady, who had been told they could go and had been prepping for weeks, had to sit it out. Basically, we found out Friday night that, due to low numbers elsewhere in the state and an astounding number of last minute registration withdrawals from other schools, we would have to drop two of our entries to be in compliance with National Speech and Debate Association policies.

Despite the immense time and effort they all had already put in and the enormity of the opportunity, all six were very willing to take the hit , but Hope and Joshua were especially willing. Nevertheless, we consider all six of them absolute champions, as well as the whole team and the community that has supported them. Thank you!

Here are the details. All four who competed broke to the final round of debate (the only school with multiple entries to achieve this feat) -- meaning Yarmouth students comprised half of those present in the final round of competition! Thanks to their incredible hard work, Sebastien Martínez, Tyler Lucca, and Georgia Herr are 5th, 4th, and 3rd alternates respectively to the National Speech and Debate Tournament, which will be held in mid-June in Louisville, Kentucky.

Maddy Corson, meanwhile, is the Maine District Congressional champion! Thus, she now has earned the top honor in BOTH of this year’s Congressional championships and has nabbed a spot at this national tournament in addition to the one she earned last month at the National Catholic Forensic League's National Tournament that will be held in DC in May!

Had things gone as planned (AKA in practically any other year), six Maine students would’ve earned spots at NSDA Nationals instead of just two. Logically, it’s reasonable to presume that two of those spots would be Georgia’s and Tyler’s, and Sebastien would be first alternate instead of fifth. This would’ve allowed Joshua and Hope to attend as well, which could only have added to the team’s success. Alas, things obviously did not go as planned, but we could not be prouder of or more grateful for the grace with which the team rolled with the punches and the heights they reached regardless.

This was the last Congressional tournament of the year (except for the national championships, of course). As we are primarily a Congressional team, things are wrapping up. We could not be prouder of or more grateful for the grace with which the team rolled with the punches and the heights they reached regardless.